Skip to content
The SMOK RPM40 is a pod mod with an internal 1500mAh battery and a plastic 4ml capacity, side-filling pod. The vape kit also features a 0.96″ TFT display so vapers can set the wattage. The device is compact and portable, measuring only 3.93″ tall and 0.98″ in diameter.

The RPM40 features the IQ-R chipset inside that allows for a quick-firing time, as well as the device’s 40W power output. The IQ-R chipset is what also allows the device to have a variable wattage range between 1W and 40W. Users can also adjust the resistance of their coil or set a different colour for the screen via the three-button control panel.

A First Look at the RPM40

It measures in at under four inches tall. It has a zinc alloy frame and a four-sided shape, so it is neither flat or boxy but stands like an elongated cube. The cartridges load onto the top of the device and snap into place. When a user does install one, the chip detects it and displays “Pod Attached” on the TFT display. 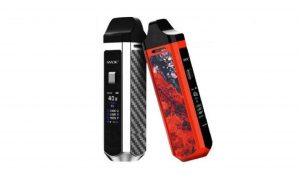 Right under the e-juice container, on each side of it, there are two non-adjustable airflow slots. These airflow slots are crucial as they provide the only air intake on the device. Users should be aware of installing the cartridges, so the slots are unobstructed.

There are various colour options for the device (8 in total), not to mention different types of side panels like carbon fiber, solid colours, or colour splashes. One side of the vape acts as the control panel. It features the square power/firing button, the TFT screen and two adjustment buttons under that. On the very bottom of the exterior is the micro-USB port to charge the 1500mAh battery. There is a tiny brand on the bottom, as well, for the IQ-R chip inside the vape.

What’s Inside the Starter Kit

Anyone who is a fan of SMOK’s previous foray into pod mods, the Nord, will also become a fan of the new device. The spare e-liquid cartridge, along with the coil, this starter kit is from the previous device, but anyone thinking that it works with the RPM pod, and vice-versa will be disappointed. While the device takes the Nord and RPM pods, the coils ONLY work with their respective pods.

Here’s a breakdown of what to expect in the RPM40 kit:

The IQ-R Chip and TFT Screen

The presence of the IQ-R chip makes it unique among pod mods. The chip allows for a firing time of less than a second, at 0.0015s. Apart from allowing users to adjust the wattage, there are no other vaping outputs installed on the board, which we’ll get into later. The chip kit also features several new safety protections to guard against short-circuits and low-voltage, as well as an 8s second cutoff feature.

The TFT screen has no border around it, so it blends into the rest of the device. Users can adjust the colour by pressing the up and firing button at the same time, which toggles between the five different colour options, represented on the very bottom of the display.

Charging the Battery and Getting the RPM40 to Work

Users can charge the 1500mAh battery via the micro-USB port on the bottom of the unit. Charging time can take in between 1.5 to 2 hours. Unlike with other similar-style devices, it has user-controlled wattage levels.

This control means that battery life depends on how high or low vapers set the power output. Using the vape at high-wattages will drain the battery quicker than vaping at lower wattages. With this SMOK device, the user has the option of how powerful or laid-back they want their vape kit.

Despite its new shape and design, the unit is not air-activated. Users need to press the firing button to make vapor. These new pods feature a mouthpiece similar to the Nord’s. It has thick plastic with a single, round airflow hole. Only it is a bit wider, allowing for more air to pass through.

Vapers need to press the power button five times to activate the device. The screen will turn on and show information in a vertical presentation starting with, from top to bottom:

The pods have two different e-juice capacities. It has a 4.3ml capacity, while the Nord has a 4.5ml, so there is only a slight difference between the two. The other difference is the rating of the two coils.

The new coil is a mesh-style, 0.4ohm that resembles the Nord coil, which is also a mesh and has a resistance of 0.6ohms. With two sub-ohm coils and a variable wattage mod, it is strictly a direct-lung vape, especially since the pods are incompatible with any other type of coil.

The two share similarities but they have differences as well. The Nord cartridge, for example, has darkened, almost opaque exterior, whereas it has a clear, transparent covering. The two pods also share a filling style, with a side fill port stopped by a rubber tab that has, depending on the device, “Nord” or “RPM40” engraved in it.

There is no sub-menu after the main menu, although vapers can adjust the color of the screen by selecting one of the six options on the line by holding down the firing and up button. Holding down the up/down buttons at the same time locks the wattage setting, but not the device so users can still vape it.

The pods have two different e-juice capacities. It has a 4.3ml capacity, while the Nord has a 4.5ml, so there is only a slight difference between the two. The other difference is the rating of the two coils.

The new coil is a mesh-style, 0.4ohm that resembles the Nord coil, which is also a mesh and has a resistance of 0.6ohms. With two sub-ohm coils and a variable wattage mod, it is strictly a direct-lung vape, especially since the pods are incompatible with any other type of coil. 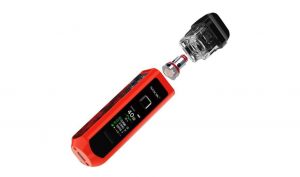 The two share similarities but they have differences as well. The Nord cartridge, for example, has darkened, almost opaque exterior, whereas it has a clear, transparent covering. The two pods also share a filling style, with a side fill port stopped by a rubber tab that has, depending on the device, “Nord” or “RPM40” engraved in it.

Both pods in this vape kit come pre-installed with their respective coil, so users don’t need to install them. They are bottom-loaded, so users press-fit them into the base of the correct pod to connect and pull them out to replace them.

One thing to remember about installing both the coil and the pod correctly, users need to place it with the airflow slots in the right position. It, as well as the pod, has two recessed edges, which line up with the two side-slots on the mod section. These vents need to align for air to get into the pod.

Once a user fills the pod and lets the wick saturate for a few minutes, they can install the pod. As stated above, the TFT display will flash the notification “Pod Attached,” but it also flashes “Pod Detached” when a user removes a pod. 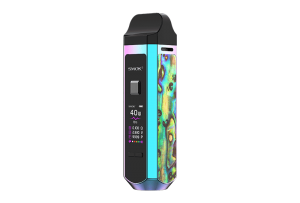 With pod attached, vapers only turn on the battery section with five clicks and then they can set their preferred wattage setting. Despite the wattage being variable, there’s nothing else a user can select or adjust, including the airflow.

The result is a straightforward direct-lung vaping experience. The clouds, even under the recommended wattage of 25W, are mid-size but very flavorful. The vapor clouds became denser at the higher wattages, while still retaining a high-quality flavor profile.

The Vape-Off: the SMOK RPM40 vs. the SMOK Nord vs. the VooPoo Vinci

The SMOK Nord is an open-system pod device like its cousin the RPM40. It pairs a mod with a built-in 1100mAh and a 3ml pod that is a side-fill, both of which are less than the 1500mAh and 4.3ml pods on the RPM40. The unit also features a chip that can power the atomizer up to a 15W maximum.

It has a simple, one-button operation as it is not air-activated, something it shares with the other SMOK device. Users can charge the internal battery via the bottom USB charging port. It kit includes several coil types, including two sub-ohm coils and one MTL, while the RPM40 has only sub-ohm coils. The Nord measures in at just 3.7″ tall, which is a shade smaller than the RPM40.

The VooPoo Vinci is an open-system pod device with a top-loading battery section. The Vinci uses a tiny 0.96″ TFT display on its aluminium-alloy and plastic frame for vapers to set their wattage, which is a bit larger than the screen on the SMOK device. The wattage range of the Vinci is between 5-40W thanks to the GENE.AI chipset inside the unit. 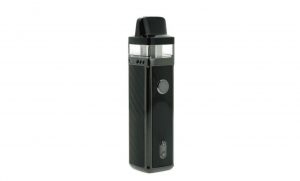 The Vinci also features an internal 1500mAh battery like the SMOK device. It also uses a refillable, see-through pod but has a 5.5ml e-juice capacity, which is greater than the 4.3ml limit for the SMOK unit. The Vinci uses both a sub-ohm (0.3ohms) and MTL (0.8ohms) coil, unlike the SMOK device that is strictly direct-lung. The GENE.AI chipset also enables the Vinci’s three power settings (3.2V, 3.5V, 3.8V) accessible via the single-button on its frame, while the RPM40 has variable wattage settings chosen by the user.

The SMOK RPM40 is the best follow-up to the SMOK Nord, as the former device has greater capabilities, performance, and power than the latter vape. It appeals (or tries to appeal) to both pod mod and box mod lovers. Its small size and functioning have pod vapers in mind, while the screen and the adjustment buttons aim directly for box vape mod crowd. It is a novel idea to meld the two styles, and it follows through on that goal.

While the ease-of-use and compactness of the device recall pods, the cloud production and sub-ohm capabilities of the device come straight out of sub-ohm vaping. The inclusion of the Nord pod and was also a great idea, as the two devices have so much in common, only it’s too bad the Nord coil and RPM pod is incompatible. Still, the result is a device that is both practical and powerful.

It offers a low-wattage vape kit that box mods cannot provide while offering a sub-ohm experience that most pod mod cannot provide. It represents the best of both worlds. Which style do you prefer, box mods or pod mods? Does each have their pros and cons? Is one better than the other? Let us know where you stand in the comments section below.